Performing the trajectory stands for travelling in the everyday life, walking in a wanderlust, in a constant destabilization of the perception through familiar spaces, actions and objects. Dressed in a multi-identity beige suite, I walked the public spaces of Edmonton with a shopping cart, exploring all the possibilities proposed by my body, my clothes, the cart, the other, and the environment. My first destination was the mythical West Edmonton Mall said to be the largest mall in north america, I walked the distance from downtown Edmonton to the mall, recreating the erveryday migration of the cars from the suburbs to the city.

106
Beige. It’s the colour of colonial explorers, caucasian skin, and the ubiquitous box mall infrastructure of contemporary consumer culture. It is dull and lifeless, conformity writ large. Before anything else, Julie Laurin dons beige. Dressed head to toe in business casual beige (shoes, stockings, skirt, blouse, and jacket) she tugs her shopping cart down the steps of Latitude 53 and it begins.

163
A concrete island runs between the road proper and a turn-off lane with street parking. Julie pushes the cart off the sidewalk and into this lane-way, then pauses. She mounts the cart and starts walking with her hands. A button pops off her jacket and rolls a little ways ahead. A car approaches from behind. Julie crawls over the pavement, one arm span at a time. She moves to the side and the car passes by. 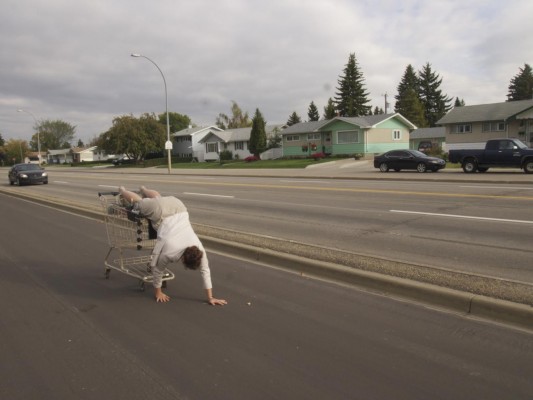 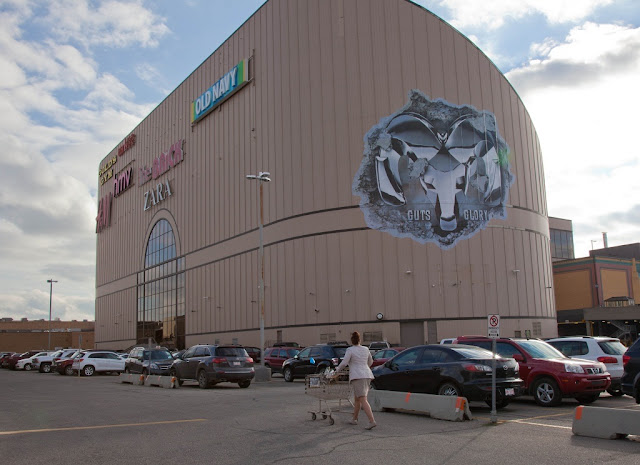 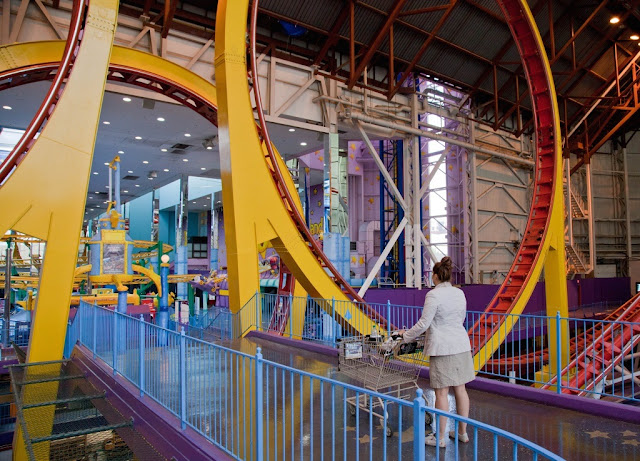 Beneath the twisting tracks of crayon yellow steel and empty, rocketing coaster cars, Julie lays out the carpet/blanket that was nestled in the basket of the shopping cart. It’s a wheel of fortune where the only marked space is “Bankrupt.” She smoothes out the wheel, rolls the cart to the centre, takes her shoes off, and climbs aboard. With knees tucked up and arms wrapped around them, Julie sits, still and silent, amongst the noise and chaos of Galaxy Land. 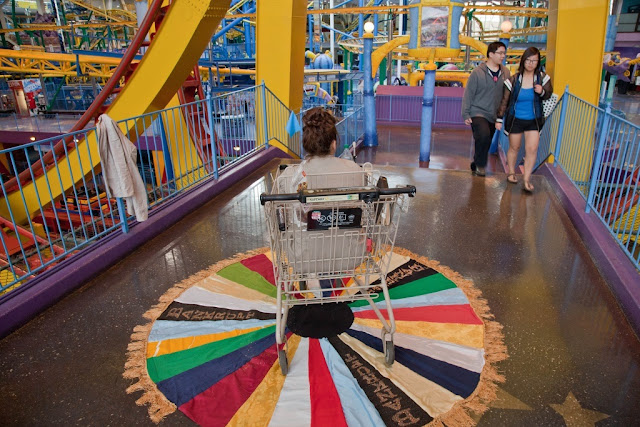 If yesterday’s action was analogous to a drawn bow and the resulting arrow, today’s Performing the Trajectory is a meandering pinball bouncing around the urban landscape. The walk to WEM was a single vector of goal-oriented touring, almost a race. Today’s exploration with-and-of the cart follows a myriad of forces bearing down on Julie Laurin and her playful navigation of human bumpers and the borders we put up around us in a public space.

She dances with the cart. She allows the cart to pull her. She bumps it along with her hips, telling onlookers: “Check it out! No hands!” She uses it as a ledge to climb over a black iron fence and investigate a grassy patch that defies the inner city’s concrete mandate. Today she does not wrestle with the cart, but dances with it, evoking grace from a beige metal cage. 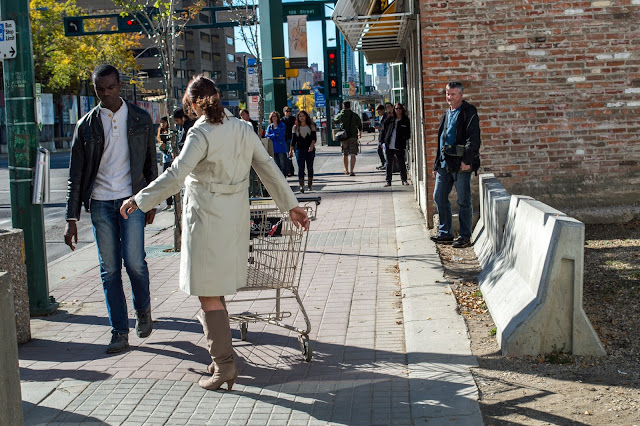 Julie perches atop an empty flower box and roots through the dirt.
She’s looking. For someone to play? For a space to wander? For the space to be? After upsetting a handful of clods, she places a piece of paper deep in the dirt. It reads: “who is the wolf now?” 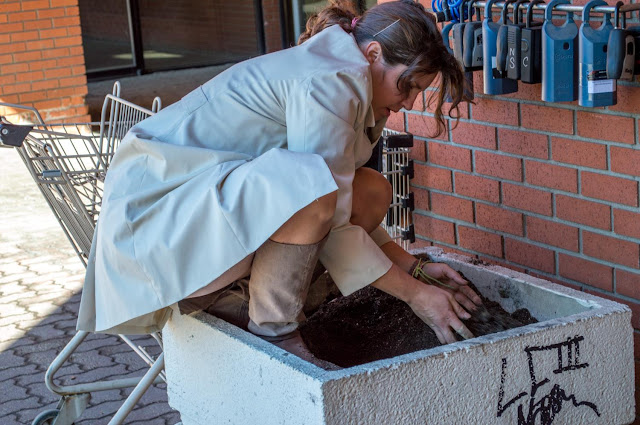 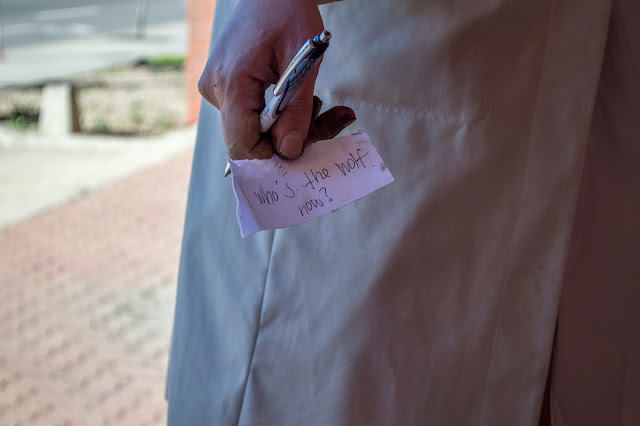 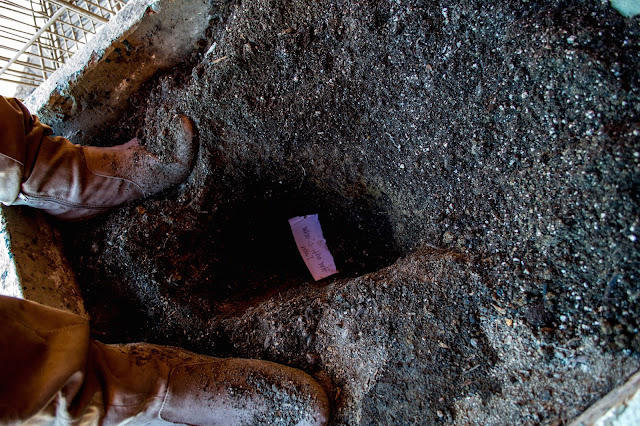 After pushing her shopping cart to the West Edmonton Mall and dancing her way through the urban steppes, there’s only one thing left on the beige wolflady’s “to do” list: destroy the material remnants of her journey, crush the cage that binds her, and create that portable manacle anew.

Julie Laurin‘s final segment of Performing the Trajectory is split between two rooms of Latitude 53. In the first room, a video dominates the wall. In it, Julie pushes the cart through a swamp of thin, muddy gruel. She’s wearing a sheer satin dress and the same high-heel boots from before. The cart slips and slides through the mud before it thickens, revealing a weltered field of corduroy, criss-crossing heavy machinery tracks. Piles — and I mean heaps — of decommissioned automobiles are stacked throughout the background. Julie rounds a corner in the filth, a shiny beacon of femininity within the pit. She stands before the gaping maw of an E-Z CRUSHER, this huge pale yellow and black machine, marred by years of use and neglect. 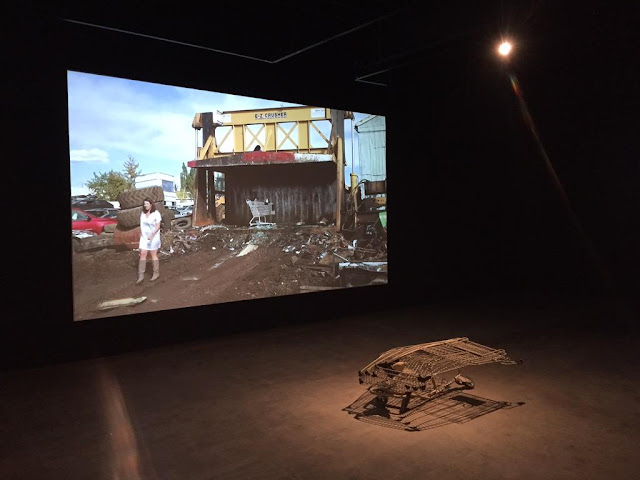 Amidst a hail of hellfire Julie lops off the back-basket section of the cart and brings it into the other room. Here she reveals pliers and a spool of wire, used to attach the back-basket to the front of the living cart, basically adding a grill. She affixes the back to the front like a metal consumerist palindrome, creating from destruction while alluding to the inevitable return of the shopping need. Back to front, front to back, and back and back again. 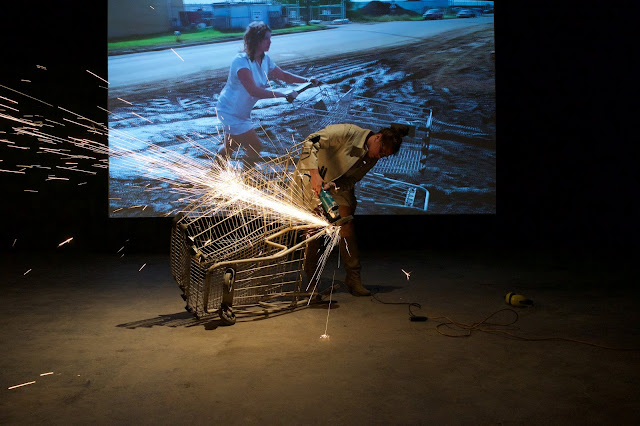 To the other room where she returns to the cart like a wayward lover, hauling it on top of herself, mounted by the cage she braces it upon her legs, her torso. The chain holding the skeleton key which nudges quarters out of the thin slot dangles just out of reach, yet she grasps for it all the same. She stands and she grabs it and she drags it by the chain into the far corner of the room. Julie climbs aboard the implanted shelf, but it rips off one corner and the edifice topples. Cart and woman tumble sideways, crashing to the floor. Undaunted, Julie pulls a bandaid from the ether, unwraps it, walks to the crowd and sticks the beige plaster to the wall. She hands another bandaid to an observer, and they place the strip beside hers. 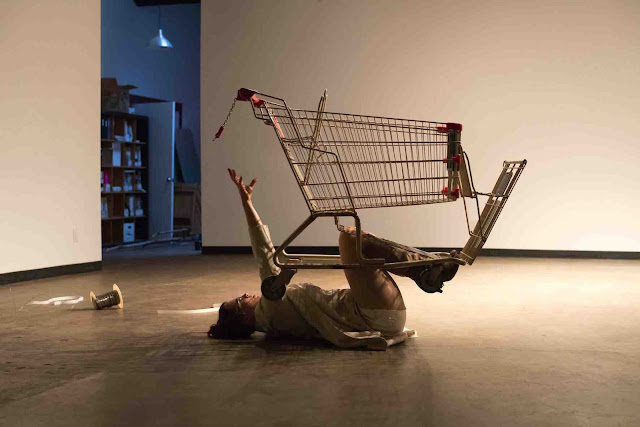 Off comes the trench coat, braced on her thigh. Out comes a white marker. Upon the beige skin of the jacket she writes, for the crowd, “DES LOUPS.” Again, the wolf. The constant prowl of the hunting/gathering female lion. The imbalanced role of satin and heels in the trenches of modern trajectories. Julie’s performance enacts the cages we drag around with us each and every day in a rich material exposition, the need for a creative interpolation to maintain sanity in the grey hellscape, and the impossibility of ever ultimately extricating ourselves from the beige cages of identity, gender, society, race, routine, rank, or class. Pick your poison. 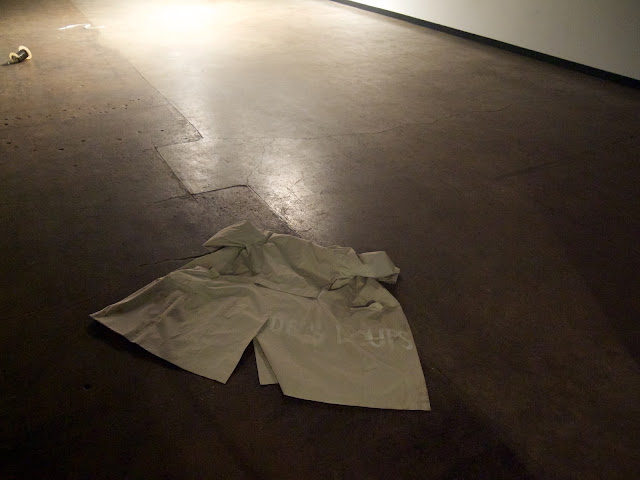 The difference between days is stark. This contrast reveals an act in unwrapping the ways in which we can move through space, and the choice we often make to do so in such a bland and unwavering way. Julie unpacks the urban space, slicing into deeper and deeper layers of urban ambulatory discontent, discomfort, and discombobulation. Like a sculptor, she carves away the experience to reveal what’s within this concrete habit that we abscond along each and every day.